The Power of Two! An Animal Welfare Story to Touch Your Heart 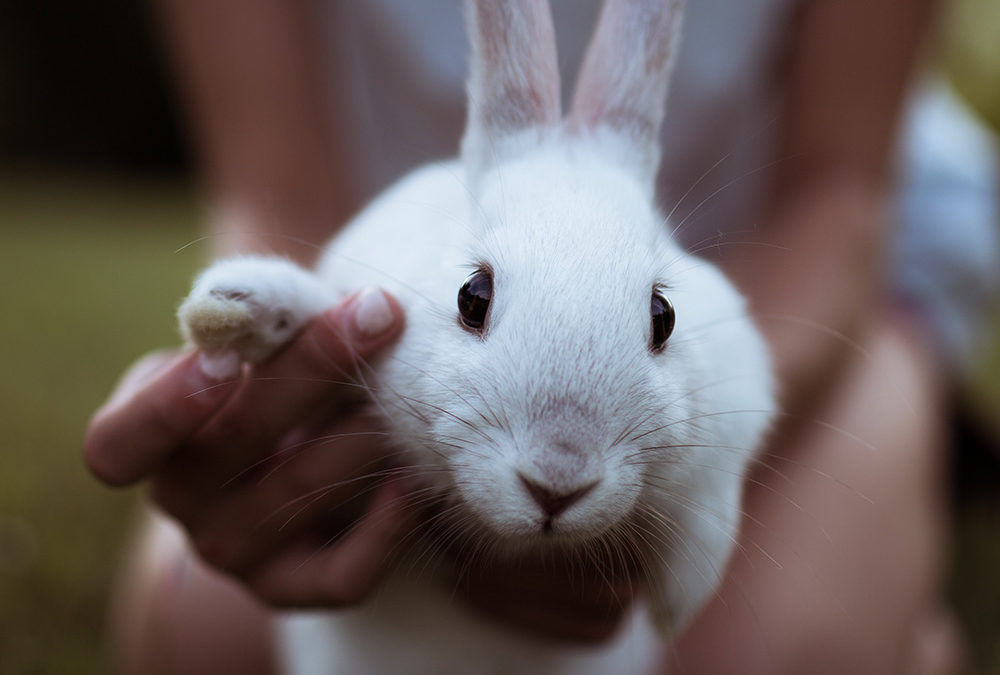 I have not actually written this blog but I am going to introduce it! Our clinic is privileged to have Andrea as a client and her delightful animals as our patients. She has shared a beautiful story about her rescued pets and their impact in her life at a critical time. She has called this story ‘The Power of Two’, but I think it should really be called ‘The Power of Three’ because Andrea is such a strong advocate for animal welfare- her actions speak for themselves. Thank you Andrea for allowing us to share your story. You are an inspiration to us!

The 4th of September 2007 would have been the approximate birth date of the most beautiful, gentle bunny I have ever owned (and I have had many), in spite of the fact he has grown to be the largest bunny I have ever owned at a whopping 8kg. Having had the misfortune to have been born in one of the largest factory rabbit farmed sheds in the State, life was grim from the outset for “Cudley Dudley”. He was born for his meat alone, along with the thousands of rabbits he shared his first six weeks with.

I had always dreamed of owning a Flemish Giant, and when I met a girl who had been rescuing rabbits from this facility, I requested she find me a Chinchilla male. A week later, we met 6 week old Cudley Dudley for the first time. My daughter (who was 13 at the time) fell in love instantly and they have been inseparable ever since. Dudley adapted quickly to life on the farm with our three dogs at the time (a greyhound and two Rhodesian Ridgebacks) as well as sheep, alpacas, and chickens. He spent evenings inside from the outset. 4 years later, I had lost 2 of those dogs, and I found myself in the fight of my life with aggressive HER2 and Hormone Receptor Positive breast cancer, diagnosed on the 23rd December 2010. My last dog died of cancer on the 3rd of August 2011. I was “dogless and bereft” and my daughter expected I would throw the towel in unless I had another dog for a companion. Through Adelaide All Breed Rescue, we found a 7 month old Irish Wolfhound pup (named Jah-Jah at the time), up for adoption. (Sighthounds are more difficult to find families for as there is the perception that big, hunting dogs can be dangerous and shouldn’t be trusted around small children or animals) Murphy had had a rough start to life. (We calculated that his birth date was entirely possible to have been the date of my diagnosis.) He was found wandering around Wagga Wagga at about 4 months of age, just skin and bone, his coat lackluster, and taken to the Pound. Seriously malnutritioned, with a chronic lung infection, he had so much mucus pouring out of his mouth and nose, the vets there were going to euthanize him the following day. The lovely Heather Robey from Adelaide All Breed Rescue found out about him and had him put on a truck over to them, got him the best veterinary care, managed to pull him through, then fostered him out to the lovely Kirsty Vasiliadis whom I know fell in love with him, as he was her first “foster”, as well as being the most charming boy. I’m sure her heart broke when she found out he was being “adopted” out to a family in Victoria. I’m sure these two girls must have wondered whether they had made the right choice when they finally met me. At the time I was going through aggressive chemotherapy, but drove the 8 hours to Adelaide to first of all meet him and the crew from AABR, sign the adoption papers, and then turn around and drove the 8 hours home. They must have all wondered if I would live long enough to be Murphy’s “forever” mother. Our day started at 4.00 a.m. on Saturday 6th August 2011 and ended at 1.00 a.m. on Sunday 7th August, 2011, when we all fell into bed, Jah-Jah jumping up beside me and snuggling up to my face, something he does to this day.

Not having seen one Star Wars movie, I had no idea of who Jah-Jah Binks (his namesake was) so my first job was to give him a new name. Murphy was a good Irish name and one I thought suited him far better. On the many days I have suffered through the treatment that has come with having breast cancer, these two gentle souls have stayed by my side, living in the house with me, calmly watching over me, neither dominating the other. The reason I am still here today is these “two” gentle, old souls need me. They are the reason for my existence. I love and adore the pair of them and they love and adore one another. I truly believe “rescue” pets spend their lives with you being eternally grateful that they now have space to roam (we have 6 acres), food in their bellies, warm bed and lots of cuddles, because they have know the exact opposite of what they have now, and realise you have given them a second chance in life. The thought of these two ever suffering again is abhorrent to me. After completing my treatment (and with a reasonable amount of hair having grown back) we took up an offer of a “family” photo shoot at Verve Portraits in Richmond in Melbourne. The looks on the faces of the “city folks” as we walked in with a 50 kg Irish Wolfhound dog and an 8 kilogram Flemish Giant rabbit was priceless. The photo session went brilliantly, proving if you can’t work with children or animals, it’s not the animals fault. We loved the photos, ordered the ones we liked, and thought nothing more of it until Verve contacted us a couple of months later explaining they were running a competition on Facebook. They had chosen 31 of their favourite photos for the public to vote on. The competition would run for a week from Friday March 22nd at 2.00 p.m. until Friday March 29th at 2.00 p.m. What happened from that point on, still astounds me. Not in my wildest dreams would I believe that the power of Facebook would carry the story of two rescue pets living in a tiny country town in Victoria (population 400), Australia, right around the world. This photo reached Croatia, Ireland, Iceland, America, Scotland, Ireland, Italy, Greece, Norway, Sweden, Mauritius, Budapest, Philippines, Italy, Austria, Canada and New Zealand, to name a few. The voting ended on the 29th March at 2.00 p.m. with “Murphy and Dudley” having received First Place with an amazing total of 1757 likes from across the globe. The funny thing is that even up until today (Thursday 11th April) the votes are still coming in, now at an extraordinary figure of 2,179. Their story has touched the hearts of many, and is continuing to do so. Some of the comments are :

“Good luck in the competition Andrea, and “well done” for adopting not shopping!”,

“Might be worth creating their own facebook page so that after the competition , their story and daily life can still be shared alll over the world !”

“Thank YOU for making my good friday. I have been reading through horrible animal abuse stories and this was a lovely story that lifted my spirits. Congrats on winning. “

“What a beautiful picture… Can you tell us a bit more about them??”,

“I wouldnt even recognise Murphy from the dog that fell off a truck at two wells that was jah jah. Golf clap to you Andrea.”

To finish off this story, I must share this with you. On Monday of this week (8th April), I was sitting in a café in Barwon Heads (a long way from home), having coffee, with Murphy sitting next to me. A lady calls out “that is the dog on the Internet”. We have been recognised in so many places already. Not for one moment did I ever dream I would get my Andy Warhol 15 minutes of fame, but feel privileged to have shared that Andy Warhol moment through these two “rescue” pets. As put so succinctly from someone I have never met anyone from the other side of the world.